Deepa Pawate, Associate Chief Auditor, receives Emory's Award of Distinction. Each year, the Award of Distinction Program recognizes approximately 10-15 university employees who have made outstanding contributions to the Emory community. This is the highest award given to University staff members. 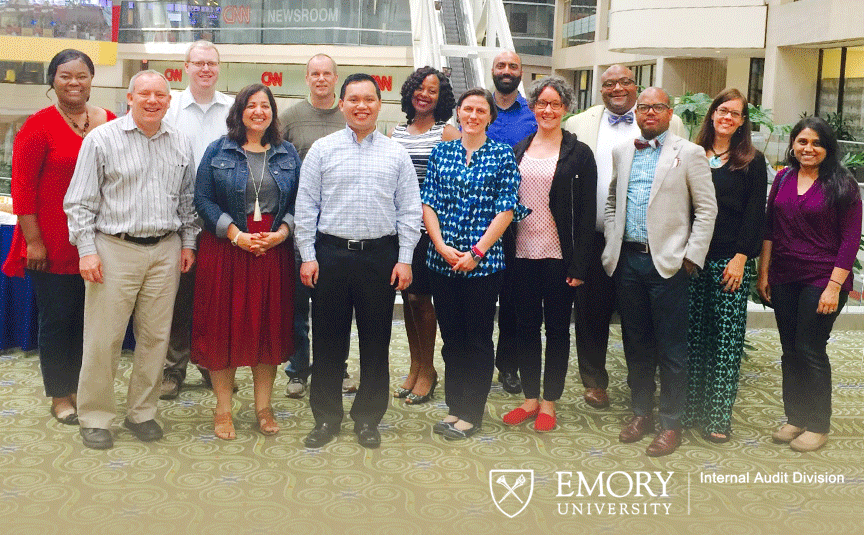 Over the past eight weeks, more than 6,000 employees from Emory University and Emory Healthcare walked more than one million miles in the Move More Challenge. The program, which began Sept. 21 and concluded Nov. 15, encouraged faculty and staff to add more physical activity to their daily routines.  Challenge participants used a Fitbit device to track their activity, set goals and compete with their friends and co-workers. Collectively, participants averaged 9,116 daily steps.  The Move More Challenge participants made up a total of 40 Emory department teams, which competed for the most steps. The following winning teams will receive a Move More Challenge trophy: 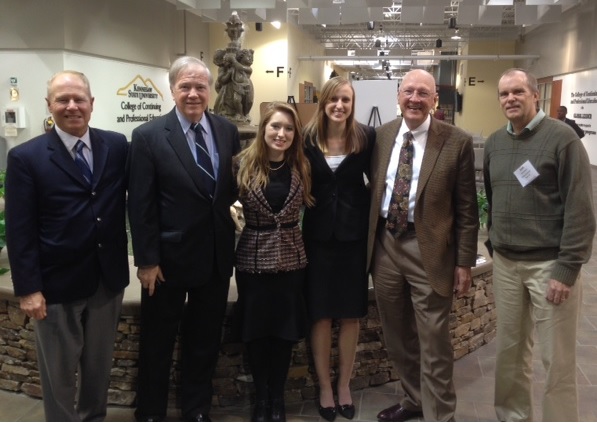 The Emory Internal Audit Division attended StrengthsQuest Workshop, led by Ms. Jill Camper, Associate Director for Student Life (Emory University School of Law), at the World of Coke. IAD Team members were able to understand their top 5 signature themes, how they relate to one another and recognize their strengths and use in multiple communities in which they find themselves (work, home, community, etc.).

What is StrengthsQuest?  Your StrengthsQuest journey begins with a 30-minute online assessment, the Clifton StrengthsFinder. This assessment has helped more than 12 million people around the world discover their talents.  After you take the Clifton StrengthsFinder, you'll receive a customized report that lists your top five talent themes, along with action items for development and suggestions about how you can use your talents to achieve academic, career, and personal success.  For more information visit:  http://osls.emory.edu/programs/strengthsquest/ April is Sexual Assault Awareness Month, and the Respect Program in the Office of Health Promotion in the Division of Campus Life has been commemorating with a month of events culminating in Denim Day on April 22, 2015.  $1,279 was donated to the program based upon the number of participants wearing jeans!  The Internal Audit Division Participated to show its support for sexual assault survivors.  #EmoryDenimDay 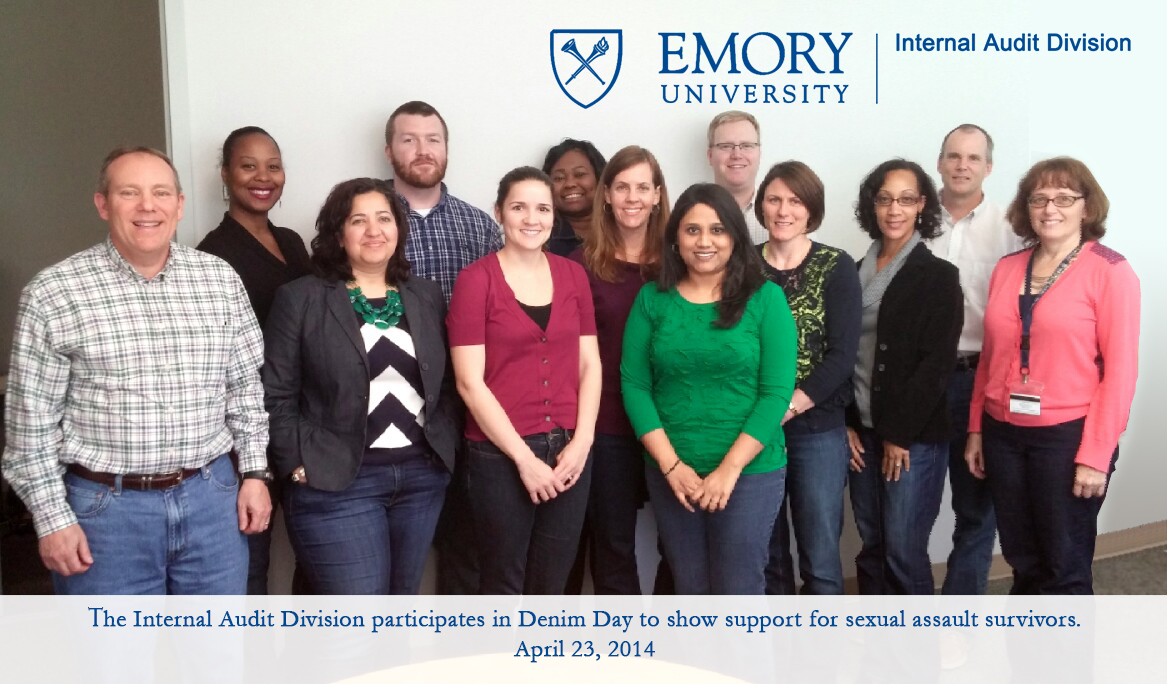 April is Sexual Assault Awareness Month, and the Respect Program in the Office of Health Promotion in the Division of Campus Life has been commemorating with a month of events culminating in Denim Day on April 23, 2014. The Internal Audit Division Participated to show its support for sexual assault survivors.

“Ethics of International Research and Scholarship” Competition at Emory

The Program for Scholarly Integrity (PSI) of the Laney Graduate School is holding an “Ethics of International Research and Scholarship” case design and analysis competition. Participants will design a case scenario that exemplifies the key challenges to scholarly integrity and international research, provide an ethical analysis of the case, and describe how the case and analysis can be used in a training workshop or class. The competition is open to all students enrolled in a doctoral program at the Laney Graduate School, and the deadline for submissions is April 1, 2014. The first place submission will be awarded $1000 followed by $700 and $300 for the second and third place submissions. It pays to be an ethical scholar at Emory!

In September 2013, the Campus Services Division at Emory formally adopted a Mission, Vision, and Values (MVV) statement to define the operations of Campus Services and its employees. The MVV expresses a commitment beyond merely following applicable laws, regulations, and policies. It expresses Campus Services’ ethical commitment to “doing the right thing, the right way, for the right reasons.” Click here to see the MVV document. In addition, the "CS Select - Employee Recognition Program" rewards Campus Services employees who are nominated based on certain qualities or characteristics they exhibit in the workplace, one of which is ethics! These initiatives highlight Campus Services’ contribution to an ethically-engaged culture at Emory.

His Holiness the XIV Dalai Lama was the honored guest and central participant in two lively events focusing on secular ethics held at Emory on October 8 and 9, 2013.  Catch the webcasts at http://dalailama.emory.edu/webcast/

The Trust Line Online is here!  Emory’s Compliance & Ethics Program has launched a new online reporting tool for anyone wishing to report compliance or ethics concerns using the computer instead of the telephone.  Go to www.mycompliancereport.com/EmoryTrustLineOnline.  You can report anonymously and your IPA address will not be visible to Emory.  This tool is provided by a third-party vendor.  Reports are triaged daily by Emory’s compliance officers and handled confidentially.  Questions about how it works?  Contact Sarah Putney at sputney@emory.edu, John Lawley at jlawley@emory.edu, or Stephen Goddard at Stephen.goddard@emoryhealthcare.org.

Scott Stevenson was appointed Interim Chief Audit Officer in August following the departure of Michael Bordoni, who served as Emory’s Chief Audit Officer for six years.  Mr. Bordoni is now a partner in the advisory and consulting practice of Dixon Hughes Goodman LLP.  The IAD team members appreciate Mike’s significant leadership contributions to Emory and our department and wish him all the best in his new role.